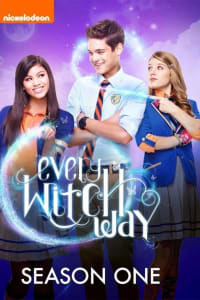 Every Witch Way is an American telenovela-formatted teen sitcom ,Emma Alonso moves with her father Francisco to the suburbs of Miami, Florida, where she attends Iridium High. She later learns that she is a witch, and is also the “Chosen One”, having great powers and abilities of her generation. Emma barely makes it through the school year with the help of Lily, the school nurse who is Emma’s guardian, Andi Cruz, her best friend, Daniel Miller, a mutual crush, and the rest of the Sharks, Iridium High’s swim team. There are obstacles along the way, too, including Maddie Van Pelt, the leader of the Panthers, a trio of the school’s most popular girls, who is a newly profound witch and Daniel’s ex-girlfriend, and the principal, Miss Torres: she is a 400-year-old witch and the old Chosen One, too, but she’s malicious. During the upcoming eclipse, she plans on taking Emma’s powers, but fails after Maddie and Emma join forces, despite their differences, and send her away using a spell from the Hexoren, a book of spells that Emma inherited from her late mother. At the end of the season, Daniel and Emma become a couple; also, after defeating the principal, both witches think they lost their powers, but in reality, Emma still has them, and she keeps this a secret from Daniel in season 2.

Darby and the Dead

Father of the Bride

When the Starlight Ends